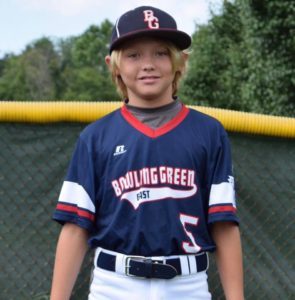 The Mason Goodnight Award is given to one BG East minor leaguer and major leaguer each season. The award is named in honor and memory of Mason Goodnight, who exemplified the qualities of attitude, leadership, and sportsmanship. He epitomized the type of well-rounded player and individual that Little League Baseball stands for, and Bowling Green East Little League is proud to create this award in his memory after his sudden death as a member of BG East Little League in 2017. This annual award honors his legacy and perpetuates qualities Mason characterized on and off the field.

To be considered for the honor, a player must display a good attitude, demonstrate leadership abilities, show good sportsmanship, respect decisions of coaches and officials, win without boasting, lose without excuses, and possess strong moral character.

This award is not necessarily designed for the player who has the best ERA, most home runs, or most
stolen bases. It is for the player who demonstrates athletic ability, but also the life attributes BG East is trying to instill in our youth. Some of the examples that may characterize the type of players who should
be considered as recipients of this prestigious award include:

Each manager may not nominate one player from his/her team to receive the Mason Goodnight Award
along with a paragraph stating the reasons for the nomination. Each manager will have one vote from the
nominees submitted, but managers are not allowed to vote for their own nominee. The nominee with the
most votes will receive the Mason Goodnight Award. In the case of a tie, only the individuals who tied
with the most votes will be resubmitted to the managers for another vote. If this also results in a tie, the
BG East Board of Directors will select the recipient(s). This process will be conducted separately for the
Minor League and Major League. The recipients will be announced at the end of year banquet each year,
and a trophy will be presented to the award winner. A list of recipients will also be placed on the
Bowling Green East Little League website. All past recipients will be invited each year to the
announcement of the award winner to welcome the newest member to this prestigious group.